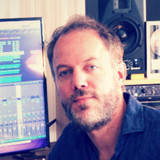 Patrik Andrén is a Swedish composer for film, tv and video games now living in Toronto, Canada. Most known for his music for the series The Bridge (Bron) and the EA game Battlefield 1 & 5. Born in Sweden he began writing and playing keyboards in bands as a teen, then he moved to Boston to get Film Scoring Degree at Berklee College of Music, moved back to Stockholm and spent a decade as a musician/keybordist, produced and wrote for various pop acts, before his voyage in film music commenced. In 2009 composer Johan Söderqvist offered him to assist and co-compose for scores such as Kon-Tiki (Academy Awards Nominated), In a Better World (Academy Awards Winner 2011), Serena, Departement Q: The Keeper of lost causes (Kvinnan i Buret), The Absent one (Fasandräparna), Kaptein Sabeltann, The King’s Choice (Kongens Nei) , Love is all you Need, The Bridge (Bron) 4 seasons (co- composed with J. Söderqvist and U. Helmersson) and more.