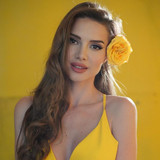 Otilia is one of the most beloved and well known artists to ever emerge from Eastern-Europe. She discovered her passion for music from an early age, taking the stage for the first time as part of the duo named “Bijue”, which disbanded in 2013. The break-up determined her to pursue a solo career under her own name. She debuted in 2014 with the smash hit “Billionera”, reaching instant fame and topping the charts in Romania, Turkey (9 weeks in a row, making her a sensation there), Greece, Bulgaria, Cyprus and Russia. This successful debut transformed Otilia into an international superstar with hundred thou- sands followers on social media in a short period of time. As of 2019, “Billionera” has amassed over 500 million Youtube views and 1,5 Shazam searches.