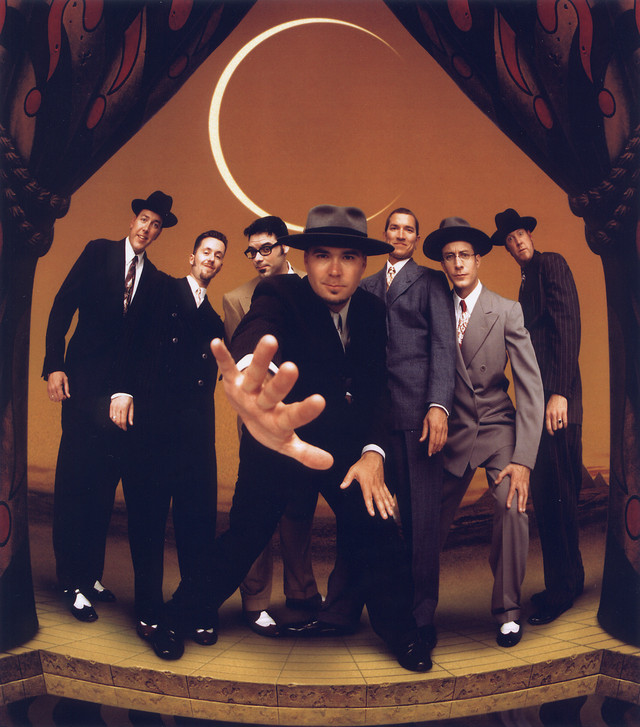 California's Big Bad Voodoo Daddy are an old-school swing-and-jump blues outfit who first came to prominence in the '90s as one of the main progenitors of the neo-swing revival. Along with similarly-inclined neo-swing acts like Squirrel Nut Zippers and the Cherry Poppin' Daddies, Big Bad Voodoo Daddy helped to revive big-band music and popularize swing dancing for the MTV generation and beyond. As with many of their neo-swing contemporaries, BBVD concentrated on the swinging days of the '40s and '50s, borrowing some of the Rat Pack lingo in addition to the zoot suits that cloaked each bandmate. Though heavily associated with the '90s swing movement, the band has thrived on touring and continued to mature, deepening their jazz influences. Formed by lead singer/guitarist Scotty Morris and drummer Kurt Sodergren in Los Angeles in 1992, the group built up a following with regular gigs on the local lounge circuit, playing to Gen-Xers enamored with the kitschy charm of the cocktail nation. This burgeoning lounge scene was captured in the hit 1996 indie comedy film Swingers, which featured a song by Big Bad Voodoo Daddy on the soundtrack as well as an onscreen cameo by the band. By the end of 1997, the band had self-released two albums -- Big Bad Voodoo Daddy and What'chu Want for Christmas -- which were local hits and led to a major-label contract with Capitol Records. In February 1998, Capitol released the group's major-label debut, Americana Deluxe (also known as Big Bad Voodoo Daddy, although the album was different from the band's self-released debut). This Beautiful Life followed one year later. By the time the band came together for a follow-up, Big Bad Voodoo Daddy had sold over three million albums, performed at Super Bowl XXXIII with Stevie Wonder and Gloria Estefan, and had their music used in over 60 film and TV trailers. The swing revival had considerably died down, however, thus returning Big Bad Voodoo Daddy to their original status as an underground band. The group's fifth album, Save My Soul, appeared in 2003, five years after their Interscope debut. Inspired by the New Orleans Jazz & Heritage Festival, Save My Soul found the band expanding its sound to include elements of the Big Easy's jazz, swamp funk, and Cajun traditions. A live CD/DVD and holiday-themed album appeared in 2004. In 2009, Big Bad Voodoo Daddy released How Big Can You Get?: The Music of Cab Calloway, which found the band digging even deeper into a hardcore jazz and swing sound. The band stuck with the more swing- and jazz-oriented approach after signing with the Savoy Jazz label and releasing Rattle Them Bones in 2012. Their third collection of Christmas music, It Feels Like Christmas Time, appeared in the fall of 2013. Over the next several years, Big Bad Voodoo Daddy stayed busy touring and making regular appearances at festivals around the world. In 2017, they celebrated their 25th anniversary in the music business with the release of their 11th studio album Louie Louie Louie. An homage to Louis Armstrong, Louis Prima, and Louis Jordan, the album featured reworkings of many the three jazz and blues legends' most well-known tunes. ~ Stephen Thomas Erlewine, Rovi