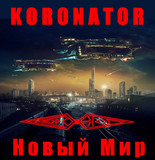 The group was established in early 1991. In May 1991, the first demo album was recorded. In the autumn of 1991, the album "Experience of Approaching Death" was released, which was included in the hit parade of the magazine "Iron March" at number 8th in the "Demo of the Year" section. Since August 1991, the band has been active in concert activities and has consistently taken first places in local charts. Currently, the band is constantly working on new materials, releasing albums and singles, performing again. On September 25, 2021, "Koronator" participated in the metal platform of the international festival OnTheWay 2021.