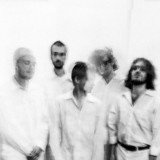 Manwolves is a 5-piece multi-instrumental band whose genre-bending sound combines elements of rock, hip hop, and jazz. Originally from Evanston, IL, the group is composed of lifelong friends Jamie McNear (vocals), Eli Cohen (guitar), Henry Wolf(bass), Julian Freeman (drums), and Ari Garfin (keys), who have known each other since high school. The 5 friends initially bonded over their individual obsessions with music. Discovering that they also all played instruments, the friends decided to see what happened if they worked together. The result was electric and Manwolves were born… The group is now based in Chicago and have steadily been building themselves a reputation as one of the most exciting, unique live acts in the city.

With multiple sold out headline shows in venues such as Lincoln Hall, Chop Shop, & Subterranean, they've had the opportunity to play alongside other major up and coming acts such as Ric Wilson and open for acts such as Omar Apollo and Boy Pablo.