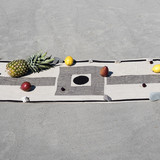 scrapes are a five-piece rock band stationed in Halifax, Nova Scotia. Channelling a true appreciation of the thrills and spills of living on the east coast, scrapes specialize in driving pop songs that speak with a loud and honest voice. The result of lifelong friendships and a mutual appreciation of cars that aren’t quite vintage, scrapes combine sturdy rhythms, hot guitars and bossy vocals in a sound that honours rock’s most modest heroes, dad’s old records, and the more surprising aspects of the 1990’s. scrapes started with the released ‘Lebaron EP’ in 2013, an album we preceded the live act. In their short time as a band scrapes have competed in the finals of Toronto’s Indie Week Challenge, held a month-long residency at the legendary Carleton Music Bar and Grill, shared the stage with some of Canada’s top rock acts and played scores of shows around the Maritimes.