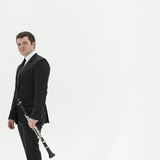 Julian Bliss is a British clarinetist. Exceptional as a student, he began lessons at age 4, using a special clarinet made for children. Following his first televised performance at age 5, he was invited to play at Buckingham Palace at 6. In 1997, he enrolled at the Purcell Academy and went on to earn a postgraduate artist's diploma at Indiana University by age 12, though it was granted when he completed high school. His teachers included David Johnston, Paul Harris, Howard Klug, and Sabine Meyer. After winning several competitions in the early 2000s, Bliss actively pursued a concert career, performing and recording with the London Philharmonic, the BBC Symphony Orchestra, the Royal Philharmonic, the City of Birmingham Symphony Orchestra, the Royal Northern Sinfonia, Orchestre National de Paris, the Seattle Symphony, and many other ensembles. Bliss is also noted for his chamber music performances, and he has appeared in recitals with Elena Bashkirova, Hélène Grimaud, Joshua Bell, Steven Isserlis, Mischa Maisky, Julian Rachlin, and Stephen Kovacevich. In addition to his performing, Bliss also designs clarinets, and he has worked with Leblanc in creating a special line of instruments. He has recorded for EMI and Signum Classics.