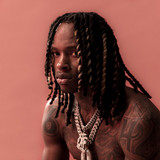 King Von, born Dayvon Bennett is from Chicago's South Side and raised in the crime-ridden O Block neighborhood. By his teen years, Bennett had turned to crime and would spend years in and out of jail before he began rapping in 2018. After hearing some of his early tracks, Lil Durk took an interest in King Von and welcomed him into the Only the Family collective. His early single "Problems" gained some traction, but it was the captivating narrative of a robbery-turned-shootout on "Crazy Story" that broke through to a larger audience. The song received platinum certification and put King Von on the map. He soon followed it up with the single "Cousins" featuring JusBlow600 in March of the next year. To further his rising career, he relocated from Chicago to Atlanta. His debut effort, Grandson, Vol. 1, landed that September. Featuring Lil Durk on a pair of tracks, the set debuted at 75 on the Billboard 200. The rapper's second mixtape, Levon James, arrived the following March: with a higher-profile list of features including YNW Melly and NLE Choppa, the rapper's second set continued his fast rise, and led to a tour with G Herbo. Von is currently working on his debut album "Welcome to O'Block", due out in fall 2020.