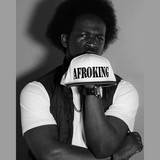 Afroking is a Zambian born rapper from Australia who's known for his witty, multi-syllable punchline raps. Having moved to Australia in 2009, he came across he newfound passion for creating music and has been working to build a name for himself and establish his place in the industry. Since 2015 he has gone on to support some of the biggest artists in the industry including YG, Obie Trice, Ty Dolla $ign and Futuristic to name a few. In 2016 he worked with Fizzle Fizz on a collaborative EP called Fusion, the lead single of which, Savage has gone on to get nearly 2 million streams on Spotify. During this time has also been constantly been releasing content on his social media some of which included adding his own rendition to famous hits, amassing over 3 million combined views on his Facebook page. For Afroking, this is just the beginning as he goes on to do. game changing things with a large following of fans and producers alike