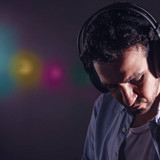 Like many, I started my journey as a solo artist by playing acoustic gigs in my local area which is the West Midlands, UK. These one-man shows started in 2008, firstly under the name Fake Sheik and then later as Omar Anthony. I supported acts like Tara Chinn and The Humdrum Express and appeared at venues such as the Hare and Hounds, The Flapper & Firkin, The Victoria, Katie Fitzgerald’s and the Yardbird Jazz Club as well as Birmingham ArtsFest. I've always gathered inspiration from dance, funk, pop and rock and like to mix drum machine based grooves with guitar riffs and vocal melodies to make my own sound. It's an attempt to bring together the old and new, which I now do with a fully electronic live set-up. I'm a former member of a number of Midlands based bands of varying genres, and I have very much tried to draw on these influences to create something unique. After working with many other musicians and learning how to apply these different styles, it then all became about going solo and finding my own way... I've built up a good catalogue of songs over this time which will hopefully reveal itself with a series of releases, the first being Deceived By The Lights, produced by ex Fatbwoi 5 bandmate and co-collaborator Fatbwoi. - an Indietronic ally!