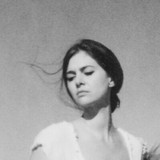 She's been called "a living anachronism". With an ethereal voice and a haunting body of song, Vera Sola makes timeless, time-bending sound. Despite a background in poetry, a career as a stage and voice actor, and years of touring in Elvis Perkins’ band, it wasn’t until early 2017 that she began to experiment with the idea of recording her own material, when a series of life-altering events reframed her relationship to music. The result was her debut album 'Shades'--written, performed and produced entirely alone. Instruments she'd never touched, hand-made percussion of chains and breaking glass, all meticulously arranged around multi-part harmonies, bringing to the fore a newly discovered vocal skill, her otherworldly vibrato. The result is a record both complex and sparse, lyrics full of sorrow, yet arch and wry. Poems and stories set to music, songs of the present that conjure the past.