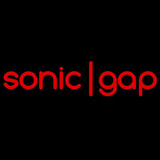 Follow Sonic Gap! Music producer from Sweden. Electronic music, synthwave/retrowave, modular, cinematic and funk. "Sonic Gap has succeeded in creating an excellent album in every aspect. I enjoyed this album very much and will listen to it many times in the future. For me, this album belongs at the top of the genres it serves and Sonic Gap proves once again that he is an outstanding artist." Mike Templar - ABSYNTH.space "Courage is an eclectic and dynamic album full of adventurous musical choices and interesting sounds. Sonic Gap is clearly a man with a strong personal voice and he’s sharing that voice with us on the album in a compelling way. I would absolutely recommend this album to anyone who likes to hear synthwave’s expansion into new and exciting territory." Karl Magi "Courage is loaded with 12 tracks of what I'd say is pure synth goodness. I've listened to this album several times, and it just gets better and better. It's easy listening, energetic, atmospheric, and moving all at the same time." Julian Green - Nightride.FM www.sonicgap.com