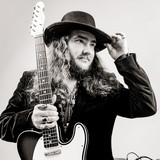 Dirty southern blues-rock under the name of a guitar sharpshooter, Tom Killner. Yorkshire, England For Fans Of: soul-drenched traditional and southern blues-rock Current album: Get Back Up https://www.tomkillnerband.co.uk/ Hailing from deepest Yorkshire, England, Tom Killner was touted as a bit of a guitar prodigy from an early age and having recorded his full-length debut album ‘Hard Road’ at the tender age of 19 you can see why. Since then Tom has played the length and breadth of the UK, as well as prestigious dates overseas; as a true road warrior, only fully content with guitar hanging from his shoulder and an audience to play to. ‘LIVE’ was released in 2017 and cemented his status as a true six-string virtuoso, coupled with an amazing vocal range and tone. Delivering a staggering array of songs, both blues classics and showing a deft skill at original song-writing, the album, recorded at a single live show, opened the eyes (and ears) of the blues rock industry. The studio follow-up in the form of Get Back Up in 2018 saw the bright young gun come of age and deliver a killer album that has touched thousands of listeners and brought new fans and critical acclaim across Europe and beyond. Tom is now deep into writing his next masterpiece which will no doubt cement his reputation of being a true six-string songsmith, with the added delight of a soul-drenched voice to set him apart.