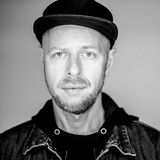 Born in Haarlem in the Netherlands, globetrotting from London to Dubai to Barcelona and now residing in Ibiza, Martijn ten Velden (MTV) has long established himself as a leading DJ/producer on an international level.   After taking a sabbatical, to concentrate on family life and his newborn son, Martijn ten Velden returned to the scene with one of the biggest Summer Anthems in Ibiza. His remix of

"Guitarra G" reached the number one spot in the DMC Buzz Chart, stayed in the Beatport top 100 over three months and was supported by the likes of Carl Cox, Nick Warren, Eelke Kleijn,