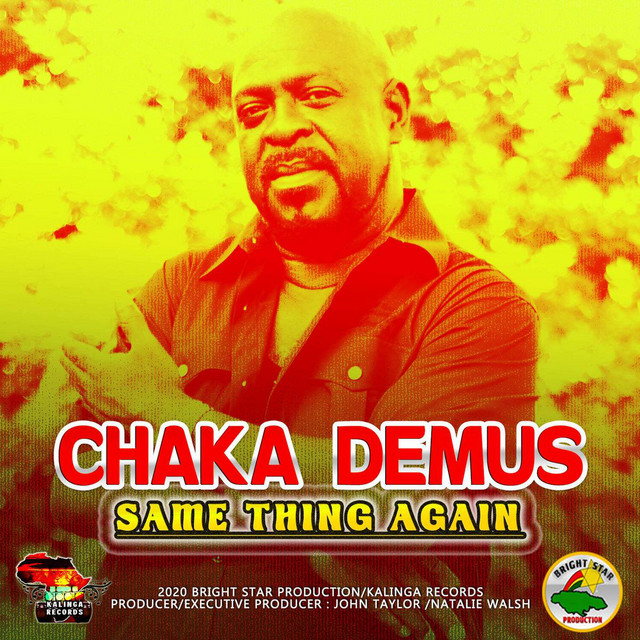 One of the most popular DJs of the '90s, the jovial, gruff-voiced Chaka Demus has notched up a string of hits in Jamaica, working on his own and with others, but it was his pairing with the dulcet-toned Pliers that brought the toaster a series of international chart-breakers. The DJ was born John Taylor, in West Kingston, Jamaica, in 1965. Like virtually all of the island's talkative talents, he began his career as a teenager in the sound system scene, working for the Jammy's and Supreme systems. Initially he toasted under the name Nicodemus Jr., his tribute to the great '80s DJ Nicodemus. But by the time the DJ began recording in the mid-'80s, he had taken the more original moniker Chaka Demus. Demus cut his first singles for Jammy's, debuting with "Increase Your Knowledge in 1985. None of his early efforts were major hits, but all boded well for the future. His potential was quickly recognized by his bigger brethren, including Yellowman, who joined him for the laudatory "Everybody Loves Chaka," Scotty, "Bring It to Me," and Admiral Bailey, with whom he cut "One Scotch, One Bourbon, One Beer." Demus moved to the Penthouse label in 1987 to cut the "Chaka on the Move" single, then returned briefly to Jammy's the next year. There, he was paired with another up-and-coming toaster, Shabba Ranks, for the Rough & Rugged album. That same year, he also recorded his solo debut, the slightly boastful Everybody Loves the Chaka, for the Scorpio label. His follow-up album, The Original Chaka, appeared in 1989 on Witty. By this time, Demus was also working with producer Bobby Digital, with whom he cut a clutch of singles. His old sound system compatriot Shabba Ranks was also recording with the producer and Digital gathered up both DJs' singles for 1989's Best Baby Father. The new decade brought a successful appearance at Reggae Sunsplash, but although he now had a slew of minor chart successes to his credit, Demus still seemed unable to break into the top league of Jamaican toasters. In 1991, the DJ headed for Miami for a series of shows with Pliers, a singer who was very much in the same boat. The two had crossed paths previously at Penthouse, and now sharing a stage, they discovered a chemistry was definitely at work. Returning to Jamaica, the pair went into the studio with producer Ossie Hibbert and cut the happy-go-lucky "Gal Wine"; its easy beat and breezy interplay between the sweet singing Pliers and the jaunty, chuckling Demus became an instant island smash. The duo now began recording with virtually every name producer in town, from Jah Screw ("Bad Mind") to Mafia & Fluxy ("Winning Machine"), as well as with Digital and for Jammy's, across a string of classic singles. Stardom had arrived, and by 1992, the pair had more than enough hits to stuff into the Gal Wine Wine Wine album, while their appearance at Reggae Sunsplash brought them further adulation. Demus' own warp-speed take on the soca favorite "Workie Workie" was included on MCA's Reggae Sunsplash Live album in 1993. That same year, the duo entered the studio with Sly & Robbie, who were currently delving into the possibilities of the new bhangra style; the first fruits of this musical union was "Tease Me," a Jamaican smash. It also brought Chaka Demus & Pliers their first international hit, when the song tantalized its way into the British Top Five. The R&B meets bhangra "She Don't Let Nobody" followed it up the U.K. chart, and as 1994 dawned, their exuberant cover of the Isley's Brothers "Twist & Shout" slammed to the top of the charts on both sides of the Atlantic. In Jamaica, the duo followed up with the hits "The Boom" and "Mr. Mention," but in a Britain always hungry for new blood, they were unable to repeat their initial phenomenal success. Although all three of the singles the pair released in 1994 charted, "I Wanna Be Your Man" and a re-recorded "Gal Wine" barely scraped into the Top 20. Amazingly, the first of this trio, "Murder She Wrote," didn't even get that high, expiring at a lowly number 27. It was a different story in the U.S., where the duo had signed to the Island label. The spectacular "Murder," all bhangra rhythm and featuring the Taxi Gang and Jack Radics, brought Chaka Demus & Pliers firmly into the American mainstream. Interestingly, the song (although not this version) dated back almost a decade, having been recorded by Pliers in the mid-'80s, and that recording itself was a version of the Maytals' '60s hit "Bam Bam." All of these hits and more were gathered up for the groundbreaking hit All She Wrote album. It would be two years before the duo returned with a follow-up, 1996's For Every Kinda People, which inevitably suffered in comparison with its predecessor. However, the title track did garner the pair another hit single, while a cover of the Police's "Every Little Thing She Does Is Magic" repeated its success in 1997. That year also brought a new solo Demus single, "Come Ya Mi Darlin' Come," while 1998 saw Chaka Demus & Pliers back on stage at Reggae Sunsplash. The pair faded from view and years went by without a word, until finally in 2001, the duo reappeared with a strong new set, Help Them Lord, on the RAS label. They continued to release new albums, including Trouble and War (2003), Back Against the Wall (2005), and So Proud (2008), and they toured and performed at festivals around the globe. ~ Jo-Ann Greene, Rovi