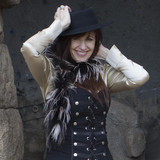 An intriguing figure of the secret history of rock, Bambi Lee Savage not only has engineering credits on landmark albums by U2 and Nick Cave, the singer and songwriter has also racked up an impressive resume of collaborations -- with Mick Harvey and Hugo Race of the Bad Seeds, Alex Hacke of Einstuerzende Neubauten, and Daniel Lanois. Indeed, Lanois produced Savage's ballad "Darlin'" featured in the movie Sling Blade. That track, along with sessions backed by Harvey and Race, are included on Matter of Time, Savage's debut disc released in 2003. She followed it in 2009 with GJ and the PimpKillers, a daring electronic and guitar-based conceptual recording featuring the then pre-Red Hot Chili Peppers guitarist Josh Klinghoffer. Darkness Overshadowed, her third record, was recorded and mixed in Melbourne, Australia. Produced by Mick Harvey, the recordings also feature James Cruickshank (The Cruel Sea) on guitar and keyboards and Rosie Westbrook on double bass. Her fourth release, an Americana extravaganza called Berlin-Nashville Express, will be available May 10, 2019.