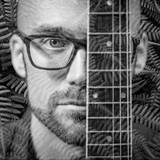 Bill’s childhood was itinerant and tumultuous. Travelling all the way round the globe before he turned seven, his family eventually settled in Kent, UK. Music and songwriting were interests from an early age, but it wasn’t until he was a teenager that the carousel of hobbies finally came to rest, with a guitar round Bill’s neck, a pair of drum sticks in his hand, and a head full of effervescing dreams of rock and roll symphonies. Playing in high-school bands influenced by 70's rock, Rush were a seminal discovery for Bill. As a philosophically inclined, lyric-writing drummer, Neil Peart was a natural idol. University brought a steady diet of dinner jazz gigs, and the discovery of many great singer-songwriters. Billy Joel, David Bowie, Bob Dylan and Stevie Wonder all entered Bill’s record collection. Classical studies of composition, harmony and orchestration left their mark too. A brief stint playing drums in a travelling circus was an ideal antidote to the years of rigid perfection that had characterised school and university. Bill acquired new perspectives on why people play music and perform, relearning the sheer joy of entertaining. “Drops of Happiness” was written while on the circus tour, and it eventually inspired the album title, Seven Long Years, as it would take a great deal more work before Bill brought it and the other eight songs to the recording studio in earnest.