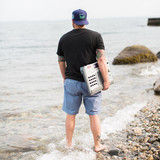 Devilsbelt is a record producer and beat maker based in Stamford, CT with roots in Long Island and New York City.

He takes his name from the Native American word for the body of water that connects CT with NY - The Long Island Sound. Devilsbelt grew up on Long Island, 40 miles east of NYC.   Devilsbelt’s style is influenced by the great sample based producers of Hip Hops golden age- Rza, Havoc, Q-Tip, DJ Premier, and DJ Muggs.   Devilsbelt is a frequent collaborator of Nocturnal, a fellow CT artist. Devilsbelt produced several tracks on Nocturnal’s Truth Be Told project. The two associates also released a standalone track called “Love and Hate” which as of this printing has been played over 14k times on SoundCloud.   Devilsbelt has competed in and placed in several iStandard producer showcase contests in NYC and Hartford, CT.   He created the original score for the film “Amigo Skate Cuba” which won Best Documentary at the 2018 Miami Film Festival. He worked closely with the film’s director and producer curating the soundtrack, and is officially credited on IMDB.   Devilsbelt will release his first beat tape “ The Long Island Sound” in May of 2018.