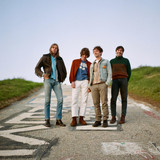 Founded by three high school friends with a shared interest in melding '70s rock with Americana, Minnesota's Night Moves emerged in 2010 with a sound that paired hooky indie pop with Nashville twang. Guitarist/lead vocalist John Pelant, bassist Mickey Alfano, and multi-instrumentalist Mark Ritsema had all played in various Twin Cities bands like the Battle Royale and Mouthful of Bees before coming together to form Night Moves. Rather than build their chops through frequent live performances, the bandmembers opted instead to practice and write diligently in their beginning phases. They carried this practice over into the recording of their debut album, Colored Emotions, which the band spent months meticulously piecing together before issuing it for free online in the summer of 2011. Responses to the album were great and the band was quickly signed to Domino Records, which issued a remixed, slightly reworked version of the album in October of 2012. Joined by drummer Josh Evert and auxiliary player Jared Isabella, the band toured extensively in support of the album. In March 2016, Night Moves returned with their second album, Pennied Days, which revealed a greater pop feel than the group's debut. Produced by Spoon drummer Jim Eno, the like-minded, ear candy Can You Really Find Me followed in 2019. ~ Fred Thomas, Rovi