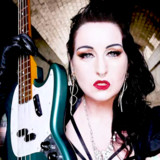 Safari Lee is an indie artist from Sydney who crafts songs and art about a weird world. The Aussie creative plays around with pop-punk hooks and metaphors, set on a solid bedrock of bass dogma. Her band uses three electric basses, vocals, and a drum kit – no guitars, no keys. Safari’s songs flit like a moth, bumping into the light globe of art pop, then catch a breath in the shadows of post-punk with an homage to the 1979 indie sound. Enjoying a multi-disciplinary approach to her art, Safari creates videos to accompany her music. Her short films have been selected for film festivals around the world. Her talent also extends to conceptual art, where she creates “Vibratings”, a portmanteau of vibrator paintings. Safari uses vibrators to create vibrant, colorful pieces, with gloss upon matt paint. Her work CV includes a wide and wild diversity, from concrete truck driver to computer programmer to dominatrix, all of which she draws upon for her musical creations. Safari’s first job was as a trumpet player in a Latin American ensemble named Musico Groupo Caribe. She also played double bass in an orchestra as a child, which led to the transition to fretless electric bass. Safari has played in bands with Lazy Susan’s Paul Andrews and Alannah Russack of The Hummingbirds, both of whom Safari has greatly respected for many years. She also appears on The Aerial Maps and Simon Gibson’s latest albums. III is Safari Lee's debut EP, released on the first of June.