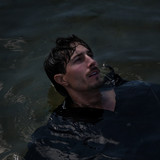 Vita Bergen is the project of Swedish William Hellström. The live-driven, often unexpected Vita Bergen, has released two full-length albums and one EP and toured extensively in Europe, and had their first shows in the US and Asia in 2019. With both career highs (award nominations etc.) and lows (catastrophic live performances), the melodic, explosive, pop-orientated Vita Bergen went from the underground stages on the west coast of Sweden to the stages on the European indie circuits, on a debut album entirely recorded in a bedroom. Vita Bergen was quickly signed by Swedish Woah Dad! records, collaborator with artists such as Robyn, Håkan Hellström and Silvana Imam. The first album Disconnection, released in 2015 was nominated for P3 Guld, Pop of the Year, and Vita Bergen signed a European record contract with former Sub-Pop affiliate Glitterhouse Records in Germany. Their second album Retriever was released in 2018 and was accompanied by tours in EU and the US. On stage Vita Bergen also consists of Josefin Eklund (who also sings on the 2019 singles Falcons and Emotions), Patrik Wennberg (guitar), Gustaf Gunér (drums) and Tuva Lodmark (guitar). "“An underground success story” – Clash Magazine UK “Know this: We heard them first” – VICE Magazine