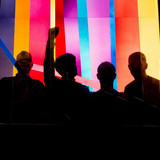 Over their time together, The Tea Street Band have created something of a cult following across the UK.   Yet, further afield, during their debut album campaign, the band travelled as far as Seoul, Europe, Australia, and America.  The band have gained support from tastemakers such as Huw Stephens, John Kennedy, Janice Long, Clint Boon, and Rob Da Bank.  The band now return with their second full-length record, which is due out late 2018 via their new home, ModernSky UK.  The Tea Street Band are formed of Timo Tierney on vocals and guitar, Nick Otaegui on bass and vocals, Lee Smith on guitar and synth and Dom Allen on drums.