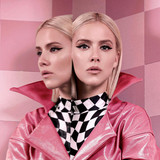 For Dagny, her striking pop music has been the perfect place to explore not just her own, but also others’ emotions. It all came together for the first time when the upbeat and contagious single Backbeat surprised the industry in 2015.   The road to international attention was quite short as the track rose the charts in multiple territories, resulting in over 40 million cumulative streams. Since then she has grown to become one of Norway’s most exciting artists, live performers and songwriters – over 450 million streams amassed, sold out tours, and critical acclaim by everyone from Nylon and Billboard to The Guardian and Harpers Bazaar, within the span of just a few short years.    Following up Backbeat with songs like Fool's Gold and the Ultraviolet EP the same year – Dagny proved she was far from a one hit wonder. The EP received unanimous praise from critics with features such as Billboard’s 10 Pop Stars To Watch In 2017. Dagny further confirmed her standing with hit singles Wearing Nothing and Love You Like That. She joined forces with SEEB in 2018 to deliver the hit Drink About – a track streamed over 200 million times by 2019. Her great track record was again complimented with the single Hit Your Heart – a collaboration with production powerhouse Steve Aoki. Dagny also co-wrote Katy Perry’s Never Really Over – racking a powerful 300 million streams on Spotify alone. Dagny has plenty of exciting plans for 2020, finally releasing her long-awaited debut album.