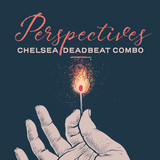 Chelsea Deadbeat Combo have been touring the stages of some of the greatest clubs since 2012 and have acquired a loyal following from Switzerland to Japan. The powerful songs will bring every mosh pit to the boil - a signature feature of Chelsea DC. On February 15th the new record «Perspectives» will be released. The eleven songs show how the band and their songs organically evolved over the past six years. The name of the record is not an empty promise: «Perspectives» is an extract of the potential the band from Herzogenbuchsee can release in the future. Chelsea Deadbeat Combo managed to transfer the positive energy from their live shows on to the new record. The new LP was recorded live at the Hidden Stash Studio in Bern and the outcome is very exciting: Eleven powerful songs, born out of the joint effort of the band; with roots in classic Hardcore, driving, thrilling, solid. «Perspectives» compares well to a 11-round boxing fight: the sheer force of the band dancing in the boxing ring, the songs hint single punches to then strike with full force. This positive power is infectious and swaps over to the audience. «Perspectives» will be released on 15.02.2019 on Subversiv Records and will be available as LP/180g CD, digital download and online streaming. A record release show is scheduled for the 22.02.2019 at Kulturfabrik Kofmehl, Solothurn