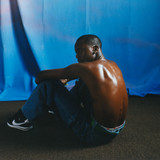 Compton artist Buddy announced his presence in the early 2010s as a down to earth yet unorthodox rapper and singer. Following Teyana Taylor, he joined a small class of artists signed as a teenager to the Neptunes' Star Trak Entertainment, and like that eventual G.O.O.D. Music signee, Buddy truly hit his creative stride years later with another label. Since signing with RCA, he has hit Billboard's Heatseekers chart with Harlan & Alondra (2018) and followed up with the commercial mixtape Janktape, Vol. 1 (2020), the higher profile releases in a substantial body of work that includes other tapes, a handful of EPs, and numerous stray tracks as a headliner and featured artist. Buddy's network is consequently just as vast. Snoop Dogg, Nipsey Hussle, and Kendrick Lamar account for a mere portion of his collaborators from his native Los Angeles County. Buddy was nicknamed at an early age by his sister. The tag stuck with the young Simmie Sims III, who began to take music-making seriously as a middle schooler. While in his mid-teens, through his manager, Buddy found an admirer in Pharrell Williams, who added him to the roster of Star Trak, and subsequently that of later venture I Am Other. Williams-produced tracks such as the rambunctious "Awesome Awesome" and reflective "Staircases" (featuring Kendrick Lamar) arrived across 2011 and 2012 and culminated with the February 2014 release of Idle Time. In addition to primary producer Williams, Cardo and Boi-1da were among the mixtape's beatmakers, while the likes of Robin Thicke and Miley Cyrus made featured appearances. Individual tracks were scattered throughout the next couple of years and led to the independent 2017 EPs Ocean & Montana and Magnolia, produced respectively by Kaytranada and Mike & Keys. Buddy then joined major-label RCA, and in July 2018 made his proper full-length debut with Harlan & Alondra. Titled after the cross streets of his childhood home, the album contained collaborations with Snoop Dogg, Ty Dolla $ign, and Khalid and entered the Heatseekers chart at number 22. A deluxe edition was issued the next year. By the end of the decade, Buddy's extensive credits as a featured artist included tracks by Nipsey Hussle ("Status Symbol"), BJ the Chicago Kid (two tracks off the Grammy-nominated In My Mind), DJ Quik and Problem ("This Is Your Moment"), and Terrace Martin ("Trail Mix"). He also contributed to several cuts on Dreamville's Revenge of the Dreamers III, such as "Costa Rica," which cracked the Hot 100. Buddy's high rate of output continued throughout 2020. That April, RCA issued Janktape, Vol. 1, an EP-length mixtape collaboration with Kent Jamz. Buddy and Raedio teamed up for "Bad Decisions," included on the soundtrack for the fourth season of Insecure. The singles "Black 2" and "Faces," the latter featuring Lucky Daye, were out shortly thereafter. ~ Andy Kellman, Rovi