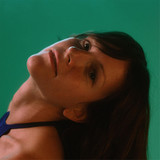 Kaitlyn Aurelia Smith formative years were spent communing with nature on Orcas Island in the northwest region of Washington state, a place she describes as “one of the most magical and peaceful places I have ever been.” Though she wouldn’t begin experimenting with modular synthesis for years, her creative work is infused with and inspired by the vitality and serenity of Orcas. Smith left to attend Berklee College of Music, where she studied composition and sound engineering. A neighbor who lent her a Buchla 100 synthesizer had a profound effect on her. Starting with rhythmic patterns and melodic pulses, she began sculpting lush and exciting worlds of sound. What began as a curious excursion soon became a fully forged path. 2015 saw the release of Smith’s full-length, Euclid, a playful and wide-eyed album that spurred from her experiments in writing music for geometric shapes while at the San Francisco Conservatory. Little more than a year later Smith returned with her wonderstruck psychedelic breakthrough EARS to universal praise in the spring of 2016. The Kid was released in October 2017. The sprawling set is a sonic representation of four distinct stages of the human lifespan, from birth to self-awareness to the forging of one’s individual identity to old age and death. Working with a wide array of synthesizers, Smith created an album that is at once personal and universal, sonically engrossing and lush.