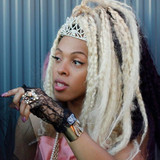 Linda LaBeija is a multidisciplinary artist, teacher and curator from the Boogie Down Bronx of New York. Through workshop facilitation and communal performances, her work explores the complexities of living as a transgender woman of color in today’s America. Born out of the Iconic House of LaBeija in the underground New York City Vogue Ballroom scene, Linda’s work has been articled in both AFROPUNK and The Fader. She has been featured in The New Yorker, Timeout New York and W Magazine. She has curated performances through The Bronx Academy of Arts and Dance, La Mama Experimental Theater, New York Live Arts and VICE. She can also be seen in the feature film “Pariah” directed by Dee Rees and in the FX series “Pose” produced by Ryan Murphy. Currently, her work can be found archived at the Brooklyn Museum in the “Nobody Promised You Tomorrow: Art 50 Years After Stonewall” Exhibit.