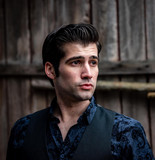 Originally hailing from the northern suburbs of Chicago, Illinois multi-instrumentalist singer-songwriter Kent Dean has spent the past 15 years moving all around the country. He began training as a classical pianist in Los Angeles, California at the age of 13 before teaching himself guitar and realizing he had an affinity for songwriting. He studied acting at the Baron/Brown Acting Studio Santa Monica, CA before moving across the country to pursue his passion of music and songwriting in Nashville, TN. His biggest inspirations are drawn from such musical legends as Elvis Presley, Elton John, Queen, and Chris Isaak to today’s greats: OneRepublic, Mumford Sons, Imagine Dragons, and Coldplay. He likes to consider his music to be a fusion between an old soul and a young heart. Blending the beauty of the past nostalgia with the cutting edge of technology and high intensity musicianship into a version of music he likes to call Gypsy Rock.