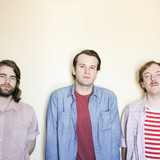 For Omaha’s Twinsmith, making a third full-length album came with an opportunity to strip their process down to its essential parts. “The process of getting more serious as a band usually involves going into studios for longer periods, getting more producers involved, and spending more money on equipment. But for this new one we drew back a lot. We recorded it like when we first started—in the dining room at our house, with old synths and ’80s drum machines,” says Jordan Smith. Twinsmith invited their Omaha neighbor, Graham Ulicny (Reptar, The Faint), as the sole producer, and this limitation on personnel would remain the only strict rule for the next record. By removing distractions, Twinsmith found that this cleaner approach allowed them to focus on the same goals. “The main goal was to make something a bit more personal to us,” Smith says. “(Alligator Years) was kind of in-your-face pop music and that’s why we made this so short and sweet; we wanted listeners to hear the small, distinct sounds we were working on.” By stripping words, music, and players down to their raw parts, Twinsmith have created a work of confident determination. Melodies soar, rhythms sway, yet beats pulse with a laid back urgency. From the simple three-color design of the cover to the barebones process that created the sounds, Stay Cool rewards with its mysterious simplicity and an ability to connect.​