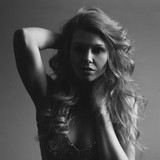 Multi-platinum, award winning Sony ATV producer and songwriter Rob Wells (Arianna Grande, Selena Gomez, Nelly Furtado, Justin Bieber) delivers the newest single by songwriter and recording artist Candice Sand titled: “I Get Up”. “I Get Up” was written just before the #MeToo movement appeared. The single comes from Candice’s experience of being a woman in the music industry but also from simply being a woman in this world. She counts herself lucky that she has never been violated the way so many women have, but says she has definitely had the unfortunate experience of dealing with men in positions of power trying to test her boundaries and push her around. “I Get Up” is an expression of strength and solidarity amid a continually evolving issue.Most recently, Candice released her singles “Just So You Know” and “Closed Doors”. Candice was first introduced to audiences with the release of her debut EP “Against Concrete Walls” in 2014.

The EP helped her reach a number a career milestones including: a music video supported Much/MuchFact/BellMedia, three singles featured on radio stations across Canada, three tours totalling 29 concert dates which took her from coast to coast across Canada, and the opportunity to work with Juno award winning multi-platinum artists JRDN & Choclair.