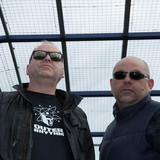 Empirion began life in 1992 at the pinnacle of the acid house scene in the UK. Having met while out and about on the party scene, Oz Morsley, Jamie Smart and Bob Glennie decided to release their first track upon the unsuspecting public. Jamie was already touring the world as a tour support DJ with fellow Essex boys The Prodigy and was inspired to release the track on their newly created label Wanted Records. The track "Narcotic Influence" went on to be voted in to the top 100 dance tracks of all time as according to dance music bible Mixmag. They followed this up with 3 more superb slices of techno with "Quark" and the double a side "Ciao & Advanced Technology". The trio were now hot property and it wasn’t long before bigger labels came knocking. Empirion signed with XL Recordings in 1995 and released their debut album "AdvancedTechnology" in 1996. They were fast gaining a reputation not only for the strength of their ownmaterial but also for their remixes for other bands.Remixes for bands like Front 242, Fluke, Praga Kahn, China Drum, Cubanate and the immense remix of The Prodigy "Firestarter" put the band on the front foot towards the late 1990’s. They supported the Prodigy throughout Europe as well as racking up many live appearances across the continent before touring America in 1997 as a part of Megadogs Big Top Tour alongside acts like Moby, 808 State, Eat static, System 7 .. It couldn't end there, They are back with a New album "RESUME" with mid summer 2019 release.