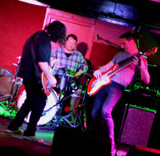 Touring with legendary artists such as Violent Femmes, Dinosaur Jr, Langhorne Slim, Grant Hart of Hüsker Dü and Ken Stringfellow of R.E.M., Andy Gallagher (guitar/vocals), Kenny Johnson (bass/vocals) and John Malone (drums/backup vocals) form the Rock/Grunge/Alternative Rock band, Overhaul. Formed in 1997, Overhaul tapped their musical influences from both U.S. coasts and Scotland to construct their own unique wall of sound built from pounding drums, catchy guitar hooks, and fist-raising vocal.  Rocking the music scene for almost 25 years, extensive touring has brought Overhaul to festivals throughout Europe, including Liverpool Sound City, Go North Festival, Inverness, and the Electric Picnic Festival in Ireland. Audiences flock to venues such as The Liquid Room in Edinburgh, King Tut’s in Glasgow, and The Cavern Club in Liverpool to get their daily dose of rock. Fans eagerly scan concert bulletins for a chance to catch Overhaul onstage.  From the roar of the opening riff of “Dry Your Eyes” on Hope Shines Through, to the overdriven but melodic guitars of the closing song “Good Intentions” on Lighter, Overhaul is able to retool their sound with each album while being consistent with their musical roots. As the quote from Jimi Hendrix reads on their artwork for Lighter, “When the power of love overcomes the love of power, the world will know peace,” many fans felt peace when the band announced a new album was in the works.