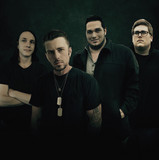 Formed in 2018, DisasterTheory is a band from Pittsburgh, Pennsylvania that combines a diverse taste in music.

DisasterTheory encompasses a unique style of mixing hip-hip vibes with a heavy metal feel, and delivers a combination that resonates with fans of various genres. The band released their first studio album “Dying Side of Life” in May of 2019 with tracks that included not only hard hitting metal but also rap lyrics and metal/folk style ballads. DisasterTheory started as a solo project of singer Mark Thomas. After a while, Thomas decided that he wanted to put together a full band. The band is now comprised of Mark Thomas on vocals, Derrick Everhart on bass, Justin Farrier on rhythm guitar, Riley Harbarger on lead guitar and Mark “Sleepy” Jones on drums. In January of 2020, the band began working on material for their next studio album “Destination Nowhere.”