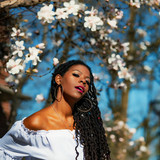 Dani is a lush chanteuse, guitarist, producer and songwriter from Ann Arbor, MI. Her influences are Erykah Badu, Radiohead, and Old Hollywood movie scores. She is a Detroit Metro Times "Artist to Watch in 2020" and leads a 4 piece band. Darling's newest release "Mage" premiered to critical acclaim, with both singles "S + M" and "All Stars" being heralded as WDET's "Best Releases of 2020". Her third EP “The Future” premiered this June to state-wide acclaim elevating Darling as one of Michigan’s brightest stars.