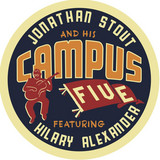 Jonathan Stout and his Campus Five

Jonathan Stout and his Campus Five, featuring Hilary Alexander is the nation’s premier swing dance band. Showcasing the small-group sound of the late 1930’s and early 1940’s, the Campus Five is the most danceable swing band anywhere. The 7-piece Campus Five captures the true sound of the Swing-era, with all the energy and excitement that inspired millions to dance. Influences include the Benny Goodman Sextet, Artie Shaw's Grammercy Five, Count Basie's Kansas City Six, and the Harlem-based small groups of Illinois Jacquet, Cootie Williams, Coleman Hawkins, and Hot Lips Page. Both founders (Hilary and Jonathan) have been dedicated Swing dancers for over 20 years, and the relationship between Swing music and Swing dance informs all aspects of the Campus Five. Song selection, tempo, song length and feel are all chosen with danceability in mind. The Campus Five’s four albums, “Jammin’ the Blues” (2003), “Crazy Rhythm” (2004), “Moppin’ and Boppin’” (2007), and "Spreadin' Rhythm Around" (2016), are favorites of Swing DJs and Swing Dance Instructors all over the globe. The Campus Five have been featured at many of the premier Swing dance events around the world, and are known for their unparalleled competition music, which inspires dancers to new heights. The Campus Five has been featured on ABC's "The Bachelorette" (2016), and on Warner Brothers TV's "Ellen" (2004).