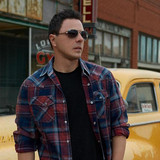 Forged in the fires of Arizona’s seminal 90s rave scene, Markus Schulz first went state, then national and with equal pace, international. From the building blocks of progressive, trance & house, he crafted early anthems like ‘The New World’ and latter-day ones like ‘Destiny’. Caught between have been many a revered album (most recently 'Escape’ and ‘We Are The Light’), a convoy of club hits and thousands of mesmeric performances, played out before untold millions. He’s helmed the scene-essential Coldharbour Recordings label for 15 years, chaired the Global DJ Broadcast radio show for 18 and remixed everyone from Moroder to Madonna. Markus has scaled the upper reaches of the world’s DJ rankings and charts; is a three-time winner of DJ Times’ America’s Best DJ crown (’12, ’14 & ‘18) and has drawn acclaim from every electronic music portal & press outlet on the planet. His eighth artist album ‘Escape’ was released to critical acclaim in the fall of 2020, accompanied by a groundbreaking audiovisual tour emanating from some of the most stunningly beautiful and breathtaking locations across the United States. Joining Global DJ Broadcast as a companion journey in 2020 is the Spotify exclusive series Destinations, with a 30 track mix arriving each month and featuring his unique blend of trance, progressive and techno; spanning the eras of current, recent and distant.