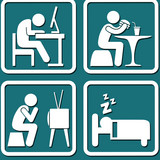 Founded at a time when records were still black and a studio mixer cost 40'000. At that time as a pure studio project, they recorded CD's and records of swiss rock musicians and bands of the 80's in their studio. They slowly developed their own musical language and therefore founded the band "Untrue" which later became known as "Untrue The Band". They recorded 6 longplayers in their own studio, and performed at home and abroad, on the beach in Greece, in the legendary CBGB New York, or in exotic places like Etzgen Aargau (Switzerland). Don't miss their videos, where you can see, that they never take themselves seriously, but always their music! Untrue "Never ending variations of Rock"