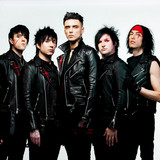 In an era when rock music is regularly declared “dead,” Black Veil Brides music videos have been viewed over a half a billion times. The band (and its members) Instagram and Twitter accounts command close to 10 million followers between them. Vale, the group’s most re- cent full-length album, went to No. 1 on Billboard’s Top Hard Rock Albums chart. With a rightful reverence for the pop cultural icons of the past, the young outfit has never- theless fashioned their own collective future, with relentless fury. In the hearts and minds of their fans, Black Veil Brides represents an unwillingness to compromise and a resistance to critics (personal and professional), fueled by the same fire as the group’s own heroes, the iconoclasts whose creative output, once dismissed, is now canonized.