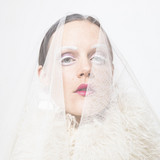 Hailing from Gothenburg, Sweden, the alluring music of KÅRP has been dubbed as «death disco», with comparisons drawn to The Knife, Lykke Li and Grimes. A dark love for the paranormal, outer space and the apocalyptic state of our times are recurring themes in both their music and lyrics. Since the debut single Therapist^2 was released in October 2017, the band has kept on refining their sound which was manifested in the album, titled Album 1, that dropped in 2019. Left Handed, their latest single, saw the light of day January 17th 2020. Although still dark, KÅRP brings new light to the electronic music scene in Scandinavia and beyond. This spring the KÅRP made an already legendary appearance at The Nordic Oscars Weekend in Los Angeles. Back in Sweden their debut album was awarded the prestigeous Manifest Prize for "Best Synth Album of the year" and with two shows at hip By:larm Festival in Oslo this truly seems to be the year of the Swedish raven.