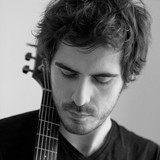 Seed Holden is a moniker of a Croatian singer-songwriter and musician Ljudevit Ivić, currently based in Berlin. Sometimes he performs solo, sometimes with a band but the core of his music stays the same - atmospheric, soothing, relaxing and melancholic folk inspired by the wide world in general. In May 2020, Sid released his third studio album, 'Soldier On'. The album was previously announced with the singles Henry Street, Wedding Player (Live Version) and White Lamb. Go on and check it out on YouTube! In Croatia, Seed Holden is part of a young singer-songwriter scene that has overcome the language barrier by singing in English. Tho' that English sometimes may be broken, it is the music that carries the most important message to the listener eventually. In the last couple of years Sid played gigs in Croatia, Ireland, Germany, Austria and had a couple of successful tours in Poland. When it comes to the music influences, there are two 'Holy Trinities' in the musician's frequent playlists: 'The Dinosaurs' (Dylan - Springsteen - Cohen) and 'The Humans' (Phosphorescent - Gregory Alan Isakov - Ben Howard).