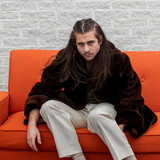 Kahone Concept officially began in 1969, but the foundations of this Pittsburgh-based pop artist/producer were laid long before then. 56-year-old Ben Orrvick taught himself how to play a variety of instruments throughout his childhood, but as he’d struggled to find people to start a band with, he took matters into his own hands and began learning how to create music independently at the age of 15. After spending time as a bedroom artist, Orrvick made the decision to begin self-releasing his work, all while writing, recording and producing entirely on his own. Thus, Kahone Concept was born: a project he named after an instrument he made in woodshop class. The name, Orrvick explains, fits the ethos that surrounds his music: “it’s important to find significance even in the smallest of things; we each find our own significance. It’s what gives us purpose.”   Kahone Concept has continued to independently develop with his 2020 releases, notably gaining traction on TikTok with his single “Maybe”. Kahone Concept’s ability to transfer his emotions from the studio to his live performances through high-energy shows, just may be the reason he has shared the stage with acts to the likes of Mt. Joy, Verite, and Weathers. UPROXX has noted his tracks as “brimming with personality as they are with melody, high quality songwriting, and production value”; his latest single titled “Hylow” creates no exception.