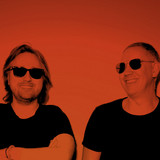 Falk & Klou thrives in the glorious nostalgia of the golden age of grooving jazz, jazzy libraries and pfunky stuff, reimagined in the year of the Corona. The Swedish duo consisting of multi instrumentalists Carl Johan Fogelklou and Fredrik Segerfalk who haphazardly met over a pile of vintage synthesizers that required immediate attention, only to realize that they had a common goal in this life - to pretend that they were recording producers and artist in the seventies. The urge led to actual sessions, first only the two, later to be followed by horn players, drummers and other desperate pandemic struck musicians. In the end ten prominent tracks emerged, with the common denominator being the love of great music. The library of Falk & Klou. Carl Johan Fogelklou usually plays bass in Swedish band Mando Diao and teaches Yoga. He has also met the king of Sweden. Fredrik Segerfalk runs Analog Sweden, a synthesizer venture, and also owns a harpsichord. Carl Johan helped him carry it. It's a beast.