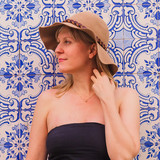 Annamania, was released in early 2021 and highlights the best of her previous studio albums and singles, as well as including a new song entitled "Jardim da Estrela." 🌿 Anna was raised in the Midwest on classical music, Aretha Franklin, and The Beatles, and started playing the guitar in high school after hearing an Indigo Girls song. Soon thereafter, she started writing songs and recorded her first album, Outta My Head, about which the San Francisco Bay Guardian wrote, "Her voice is an alluringly warm, friendly instrument--sweet without becoming cloying, tender and heartfelt and rich." 🌴 Anna started her own label and toured extensively, traveling the USA by Prius and selling records out of her trunk, inspired by DIY folk artists like