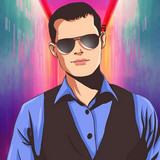 Jack Enox is an artist, producer and label owner. His first contact with electronic music dates back to 1999 when he started producing music. Influenced by the diverse music styles of the 90s such as Techno, House and Electro he has been at the forefront in the development of music and sound for over 15 years. His productions are a mix of elements from various music genres such as Rock, Pop, Tech House, or even more unique than that, thats what he calls Elastic Techno. Over the years, his passion for music has been the driving force behind his success. He is best known for his track “The Mirror” where he first started to use the elements of neopop to make electronic music and hit first places of deejay charts back in 2010. With a new release in 2021 that includes collaborative work with other top-class artists, Jack Enox is back.