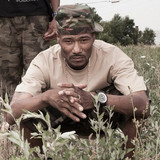 Seven the General is a Detroit Music Award winning emcee, actor and legendary street figure star of the infamous Detroit Murder City documentary which is now used as a reference tool for students in prestigious Michigan universities. Seven the General was inducted into the permanent archives of the Detroit Institute of Arts as a key figure in Detroit's hip-hop legacy after the release of the now classic A.R.T. the DIA project by Seven the General produced entirely by Nick Speed.