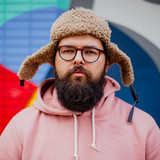 Newselph is a Hip Hop producer from Canada who has the one of a kind gift to be able to capture the raw and the refined in a single beat.   After spending ten years in a self-imposed creative exile perfecting his craft, he emerged from beneath the piles of Canadian snow with an array of samples, breaks and bars to speak life into the listener's ear. His inspirations include cultural cornerstones like Mos Def and Deepspace 5, as well as Canadian mainstays like Shad and Rel McCoy...   After dropping a carefully considered yet potent mix of music, the man met the machine when Newselph signed on the dotted line with the indie label, Illect Recordings, in early 2020.