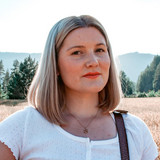 Sigrid Fossan performs country music influenced by her roots in the Nowegian countryside, and her upringing on the family farm in small town Rollag. She writes meaningful lyrics inspired from her own life and her passion for women's rights. Sigrid's first EP will be launched this summer, and the first single, Country Soul, was released April 30th 2021. The songs on the upcoming EP speak to the soul and bring out our love for (the) country(side). Get ready for music that will set your feelings in motion!   Recording the songs “I Don’t” and “Need No Man” was Sigrid's first recordings in a professional studio, and the they were done in Burbank, Los Angeles. She has since played several concerts and venues like Studentsamfunnet in Ås and Kongsberg Jazzfestival. She was also Rein Alexander and Anita Skorgan’s guest singer at one of their Christmas concerts.   In 2019, she recorded a local folk song called "Numedalssongen". She brought in several traditional local instruments, like the Hardanger fiddle, jaw harp, Kravik lyre and flute. Take a listen to the beautiful and melancholic song that takes you more than hundred years back in time to Norway's countryside.