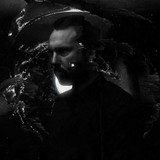 THE MAUNT is a Ukrainian rock band led by frontman Alex Forst. They define their sound as “modern rock”, organically combining the power of guitar sound, industrial, new wave and electronic elements. Alex Forst is a guitar graduate of LA Music Academy and the author of the electronic project Transcript, which creates music for films and fashion shows. During their existence, THE MAUNT released 5 mini-albums and a several videos. The eponymous debut “THE MAUNT” was released in 2015. The most recent album is “V. Reflect”, originally released in 2020 and remixed in 2021, dedicated to the complexity and inevitability of change, temptations and destructiveness of power, as well as mental balance in the modern world. V. Reflect is also a symbolic reflection of 2020, in all its contradictions - from psychological challenges in the closed world of ourselves, which isolation offered us, to alarming global political processes. Musically the EP is a strong statement with a lean towards industrial and hard electronic sound, referring to the EBM legends like Nitzer Ebb, early Nine Inch Nails and electro-industrial in style of Front Line Assembly and Skinny Puppy, yet pushing the boundaries of classic ideas about the genre.