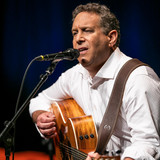 As a singer-songwriter, Gregg draws on a range of musical styles and influences, from classical to jazz, and both Russian bard music and American folk-rock. Gregg started out as a classical clarinetist, performing a broad classical repertoire at an early age. As a teenager, he added alto saxophone and ventured beyond the classical stage into jazz improvisation, a passion extended more recently to klezmer, which harks back to his East European roots. Gregg launched his debut album, “Everything that Matters,“ in 2011. The album represents a journey across the spectrum of human emotion and experience: from heartbreak to love, separation to reunion, to the euphoria of an historic election and the spirit and saga of soldiers far away. He describes his second album, “Snowing in April” (2013), as upbeat, catchy, humorous and playful, yet reflective and thoughtful, with songs about believing in and knowing ourselves, keeping to our ideals, finding true love and appreciating how special it is, and songs inspired by a snowy metropolis and by sunny islands. Later, he wrote and released the song “Not Again,” reflecting his frustration with America’s futile efforts to contain gun violence, even in the face of tragedy.

This subject was featured in his 2018 TEDx talk, which includes a performance of “Not Again.” He has evolved in his songwriting style and capability, including through coursework at the Berklee College of Music, underscoring his core belief in lifelong learning.