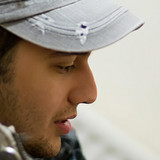 Sahand Jalali is a British singer, songwriter, and musician based in London, England. He began releasing music as Sahand in 2006 after recording with Hello songwriter and vocalist Bob Bradbury. Sahand was born in December, 1990 in Milton Keynes. It wasn’t long before he began singing along to videos of Whitney Houston and Mariah Carey in his parents’ living room. Some years later, the family moved to London, where his love for Michael Jackson and Stevie Wonder became apparent. His first band Harley was formed at age 12 whilst at school; their first foray into live performance saw them on stage at local venue The Pioneer in St Albans, now notable as being the birthplace of rock group Enter Shikari. In May 2012, Sahand won The Big Feastival Live & Unsigned competition, resulting in him opening for Paloma Faith at The Big Feastival music festival in September of that year. Sahand made the shortlist as voted for by music fans on SoundCloud; which was then presented to the judging panel which included Alex James (formerly of Blur), president of music at Mercury Mike Smith, JACK fm presenters Caroline Verdon and Trevor Marshall, and BBC Oxford's David Gilyeat. Several collaborative sessions with producer RBKeyz in early 2013 culminated in the release of Midnight, a four track EP of R&B / Soul music. All proceeds from the sale of this release went on to benefit the Football Gambia charity, as chosen by fans in a poll on the Sahand Facebook page.